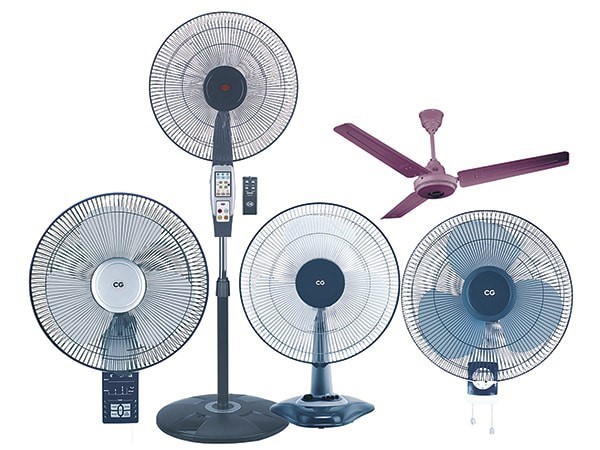 Speaking of surviving the scorching summer days, you might do without an air-conditioner, but electric fans? They are a life-and-death matter.

Each type of electric fans has its own merits and shortcomings.

Deco-Man’s here to give you an overview on the 8 types of electric fans commonly found on the market, so that you can make it through the hot days easy-breezy.

Shaped like a skyscraper, the slim built of the cylindrical tower fan looks stylish and saves space.

But the tower fan is not without flaws. It can be quite noisy when operating, and dissembling the tower fan for cleaning is an arduous task.

Different from traditional fans, the tower fan propels air through the body column with a set of impeller blades stood vertically inside the shaft.

The tower fan’s air flow strength is gentler than the traditional fan’s.

The ventilation area of the tower fan is also smaller, which renders it a more suitable option for air-conditioned environments.

But the thing with technology is that it never stops progressing. On the market, now you can easily find slimmer, quieter versions of the tower fan called the Slim Tower.

It’s quite a marvel, the bladeless fan.

Looking at its long, empty oval eye, it might be baffling to feel that exceptionally strong air flow coming from a sheer nothingness.

Here’s the mechanism behind the bladeless fan: the turbines suck air into the base of the fan, the air is forced through the oval slit of the body, creating a strong flow of air.

The bladeless fan creates minimal noise when in operation, and has a steadier, stronger air flow than the tower fan. The angle of ventilation is also wide; that’s why the bladeless fan can serve as a substitute to the ordinary ventilating fan.

Apart from being a space-saving choice, when installed next to the air conditioner, the wall fan can significantly increase the general cooling efficacy.

When installing the wall fan, you probably have to drill a few holes on the wall. Therefore, the exact position of the fan has to be carefully considered beforehand.

For example, think about whether fixing the fan in a particular position would cause hazardous or inconvenient scenarios like hitting heads or coming into close contact with other furniture.

The ceiling fan is also a good space-saving choice.

When used together with the air conditioner, the interior can be cooled down quite rapidly.

The ceiling fan’s beautiful designs can also bring elegance to your home.

The base of a clip fan is a large, strong clip which allows you to conveniently attach the fan on tables and shelf boards.

Due to its relatively small size, the clip fan has a weaker air flow than other fans mentioned above.

But to office workers, the addition of a small clip fan to the office desk is the perfect cooling solution at work.

Some clip fans can be charged with a USB cable, while others are powered by rechargeable batteries or lithium batteries.

Technically, the circulator is not a fan, since its function is not cooling, but keeping the air around in motion.

The thing about the circulator is that it creates a vortical airflow like a baby tornado. This wind flowing in vortex motion can reach very far and creates constant ventilation in the interior.

The circulator amplifies the effects of the air-conditioner and the radiator, so that temperature regulation can be more energy-efficient.