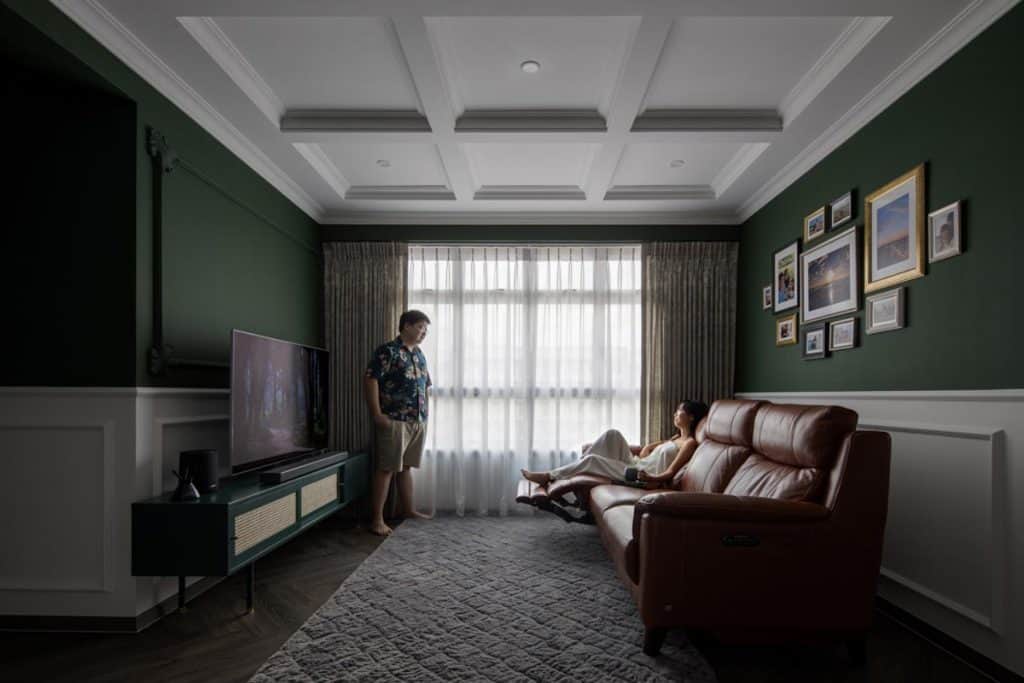 If you’ve ever visited the National Gallery of Singapore, you would have notice the stunning ‘waffle’ ceiling design located at the lobby of the former Supreme Court. This architectural marvel was replicated in Desiree and her husband’s living room of their 4-room BTO flat in Sumang Lane, as homage to both their professions in the legal field.

“The ceiling is one element in the house that is often overlooked—many settle for a false ceiling at best,” says Desiree of their decision to make the ceiling as the focal point. 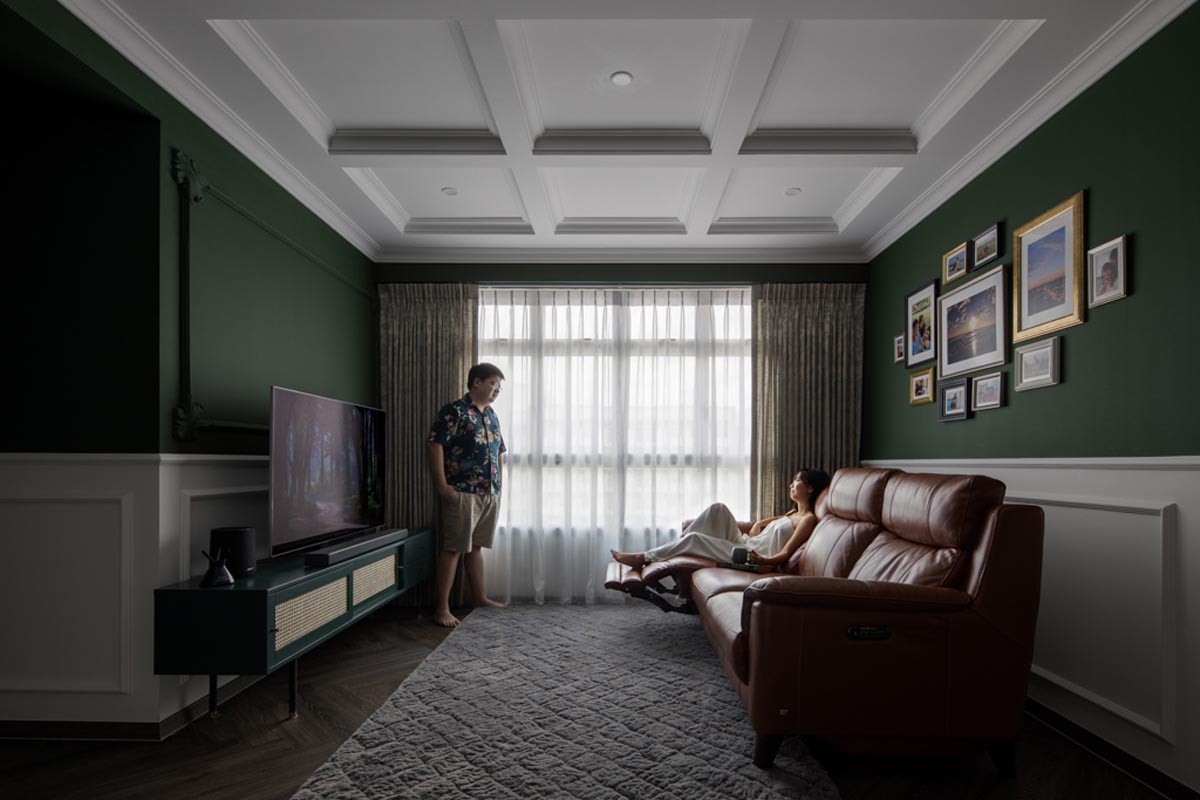 With the intricate detailing, the fourth wall is one of the first things you’ll notice when you step inside the home. The design also resulted in adding more visual depth to the living room. But where the original ceiling in the former Supreme Court is made using solid teak, the lookalike in their home needed a material that was lighter and more affordable. Joshua, their interior designer at Threehaus Works, thus came up with the idea of using fibrous plaster as the main material. 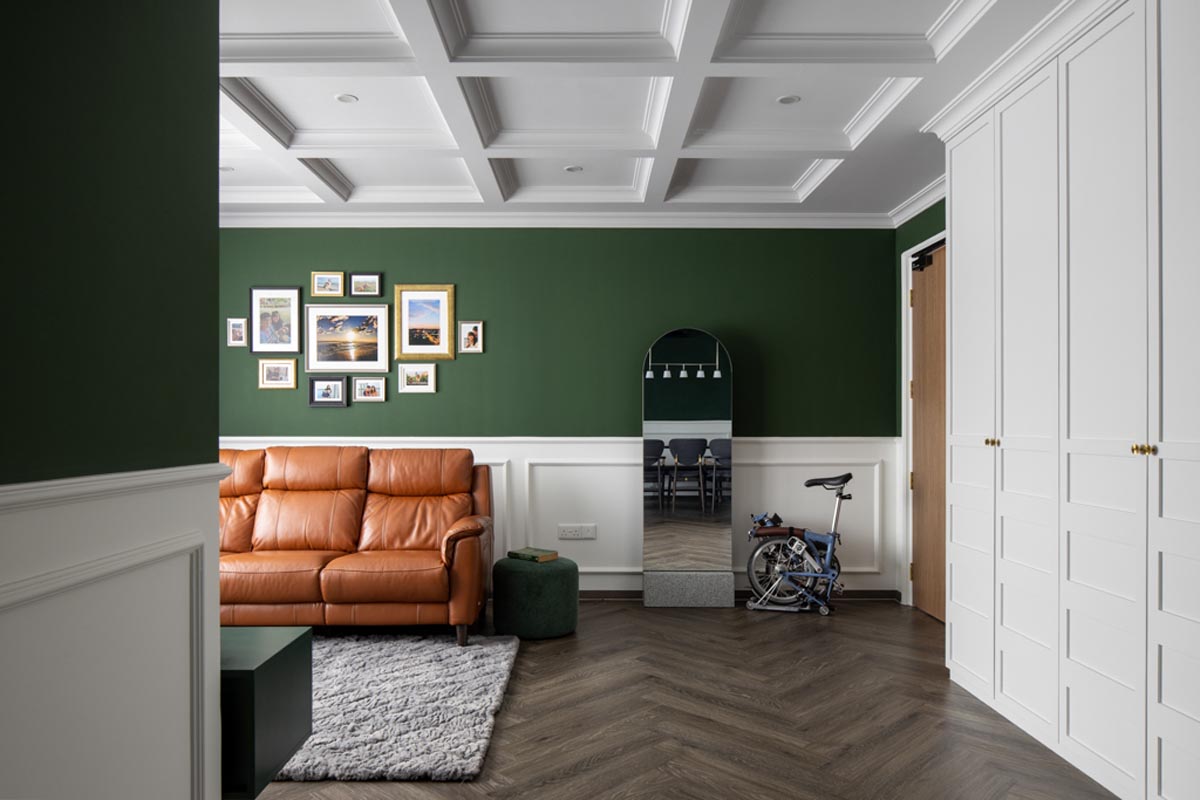 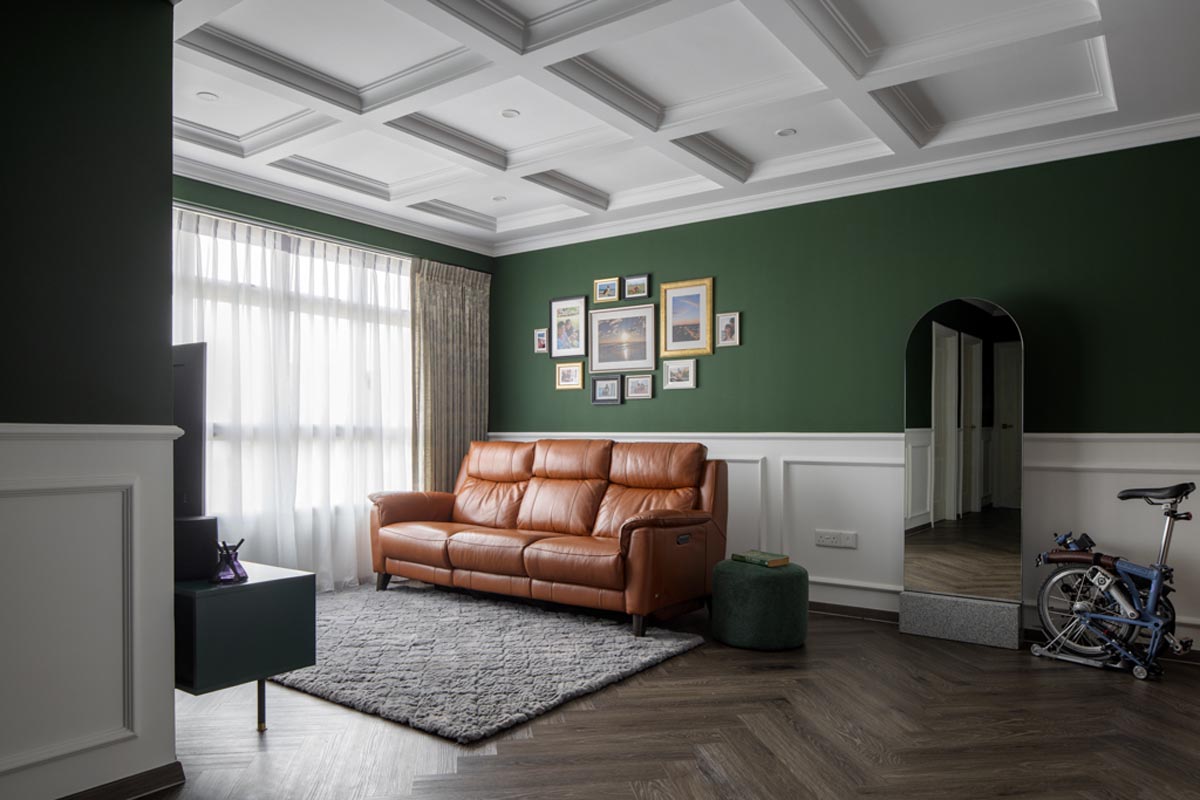 Instead of glossing it with a dark wood tone, they decided to leave the ceiling white, allowing the interiors to remain modern, bright and airy. These were the same grounds for their whitewashed wainscoting and cornices, classic elements that were included as part of their modern Victorian style home.

This particular theme was chosen because the couple wanted a home that was different to the usual minimalist or Scandinavian homes. Rather than sticking to an all-white theme, which could be too sterile, dark green and navy blue were chosen as accents for a more stately feel. 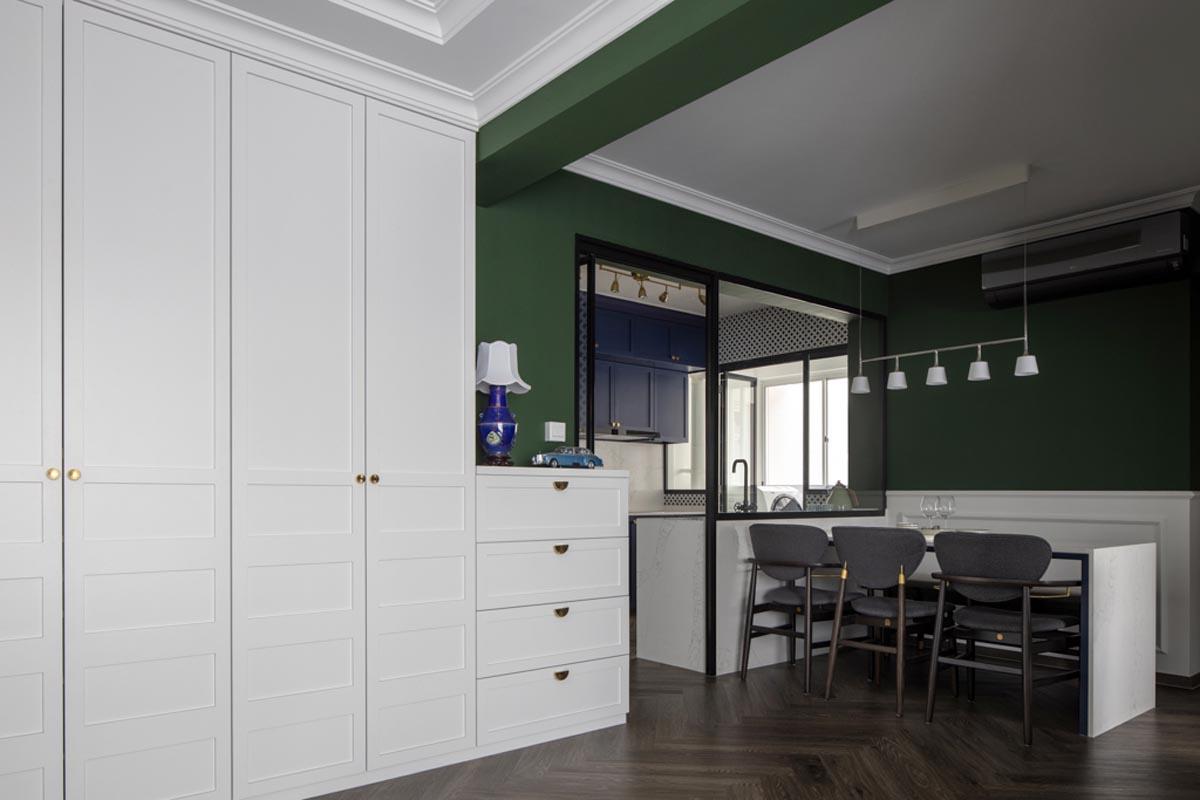 Much thought was also given to the functionality and practicality of the space. Desiree shares: “We know how clutter can build up in a home quite quickly, so we asked for a lot of storage spaces.”

You’ll notice then that the entrance of the home is lined with full-height cabinets. In keeping with the theme, the cabinet fronts are given a shaker profile to match with the wainscoting details on the walls and doors so they don’t seem out of place, fulfilling both function and form. 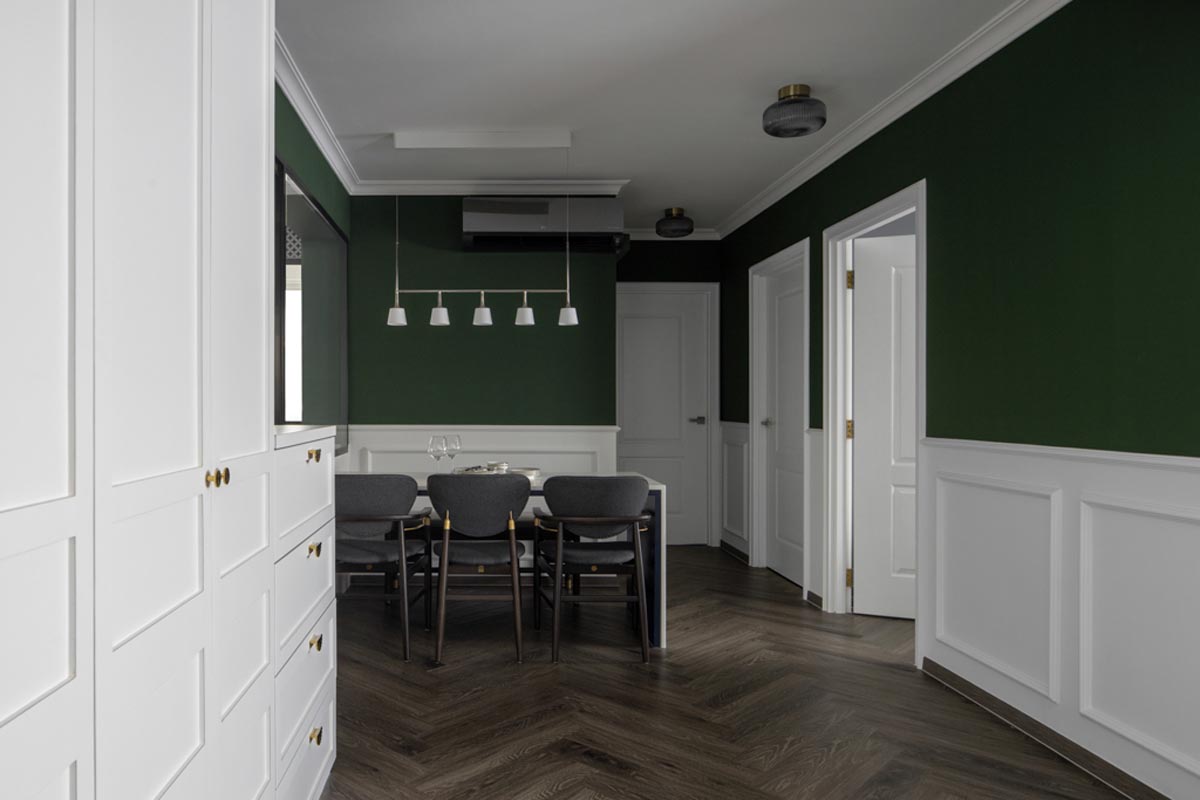 Likewise, storage was key in the kitchen. The double-stacked upper cabinets provide plenty of room for kitchen essentials, and they allow the couple to stow away less-used items at the uppermost cabinets, while keeping daily necessities at a more manageable reach. 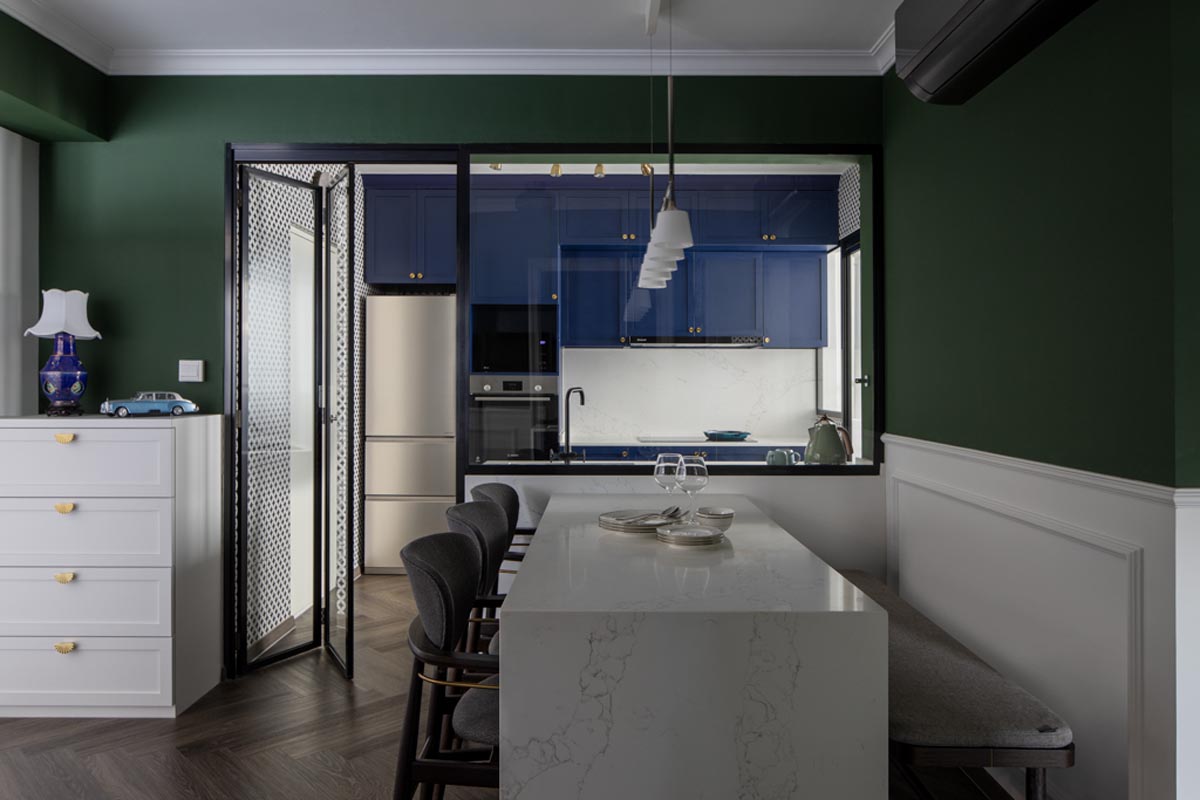 In place of a completely closed-off kitchen, they decided to enclose it with a half-height glass wall and bi-fold glass door, allowing both the cooking space as well as the dining area—which sits just outside the kitchen—to be bathed in more daylight.

Subtle marble grains in the dining area are congruent with those in the backsplash and the kitchen countertop, drawing visual connections between both the spaces and further subscribing to the delicate elegance milieu of the home. 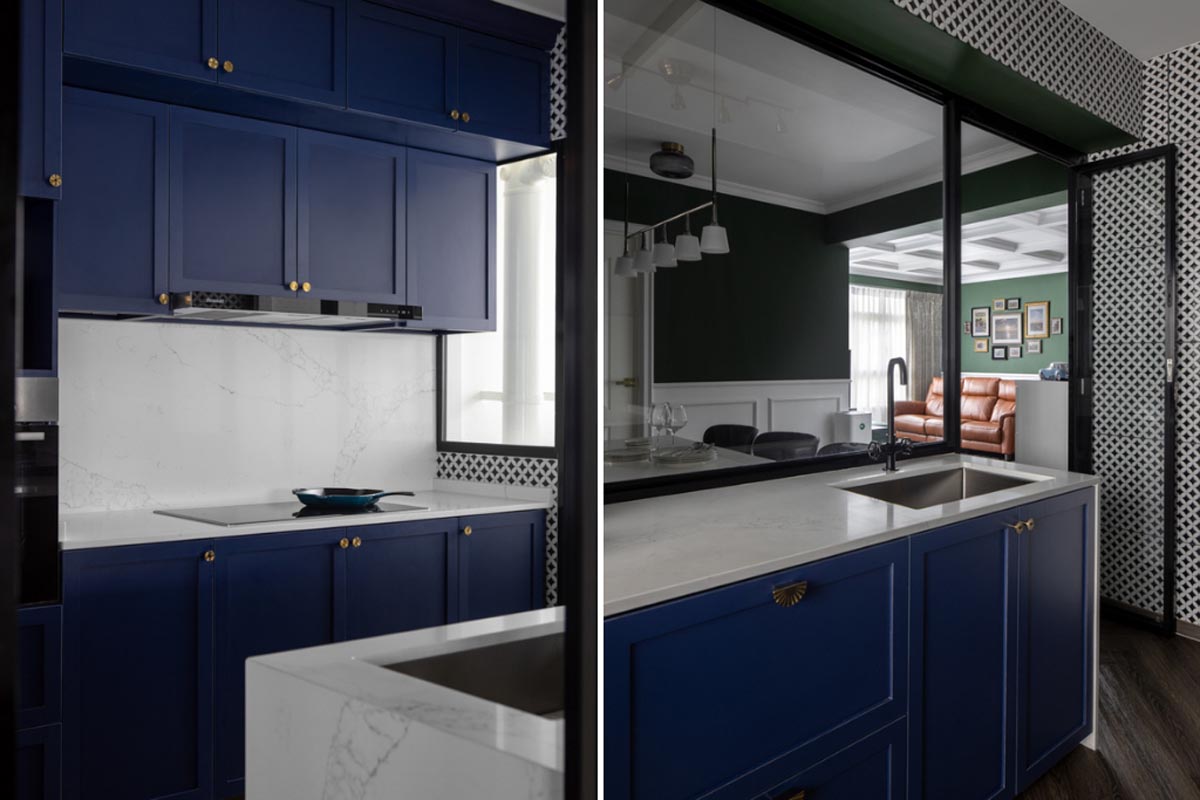 In the bedroom, the built-in wardrobe is given a shaker style not unlike those in the communal spaces. Gold handles complete the regal look. As a visual juxtaposition and to keep things light, the headboard is covered in a casual, light wood tone, although the wall-moulding style prevents it from veering too far off from the modern Victorian theme. Concealed lights direct light to the ceiling, bathing the bedroom in a cosy, warm glow. 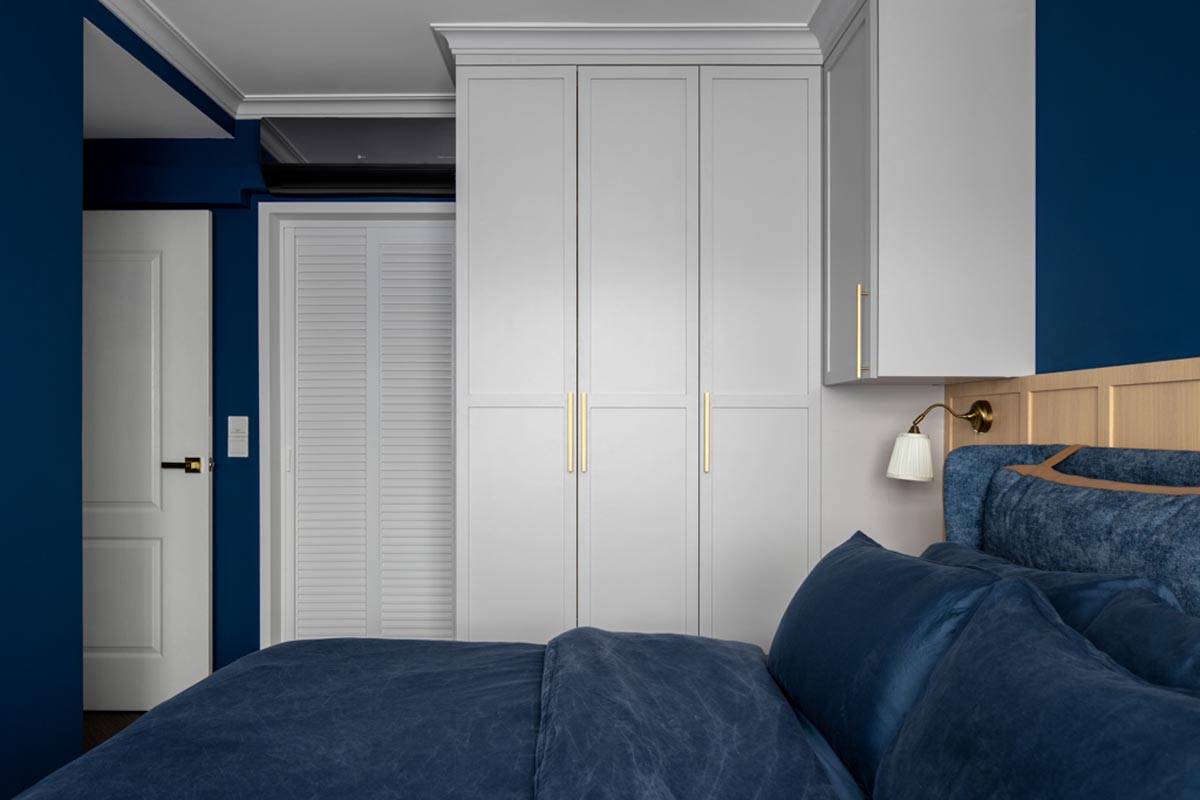 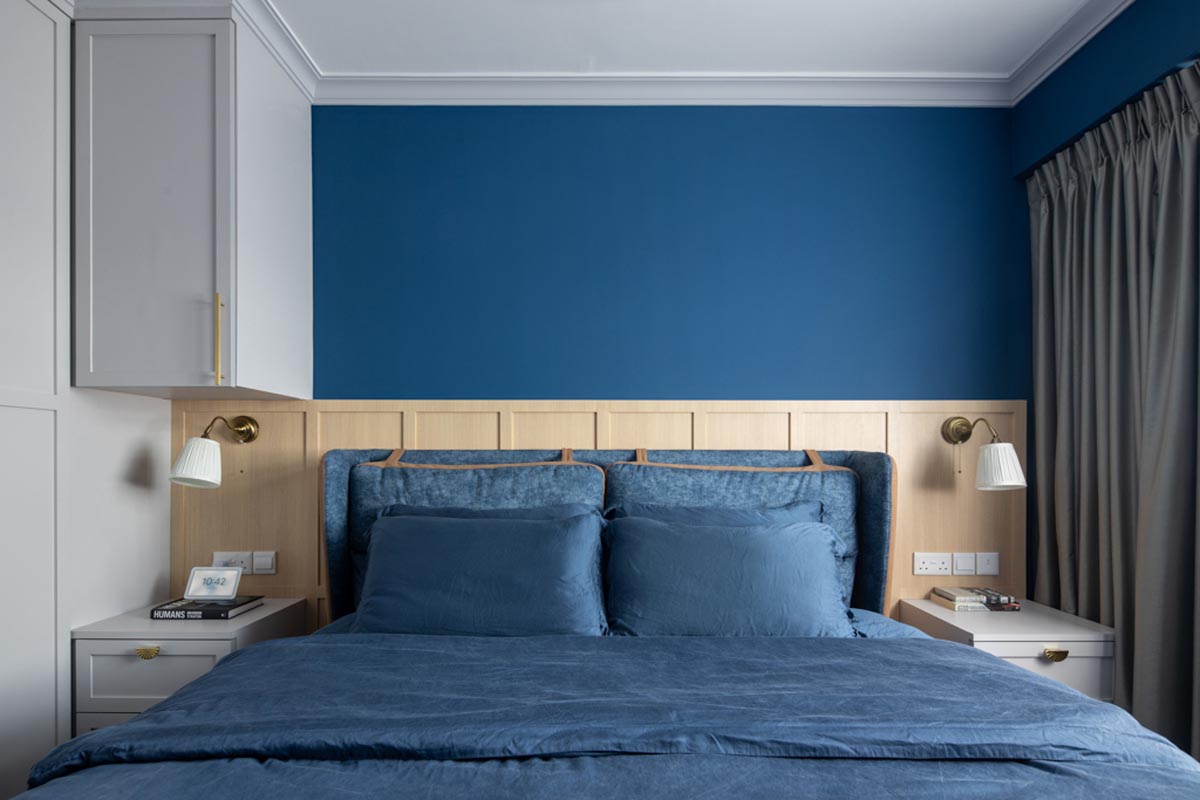 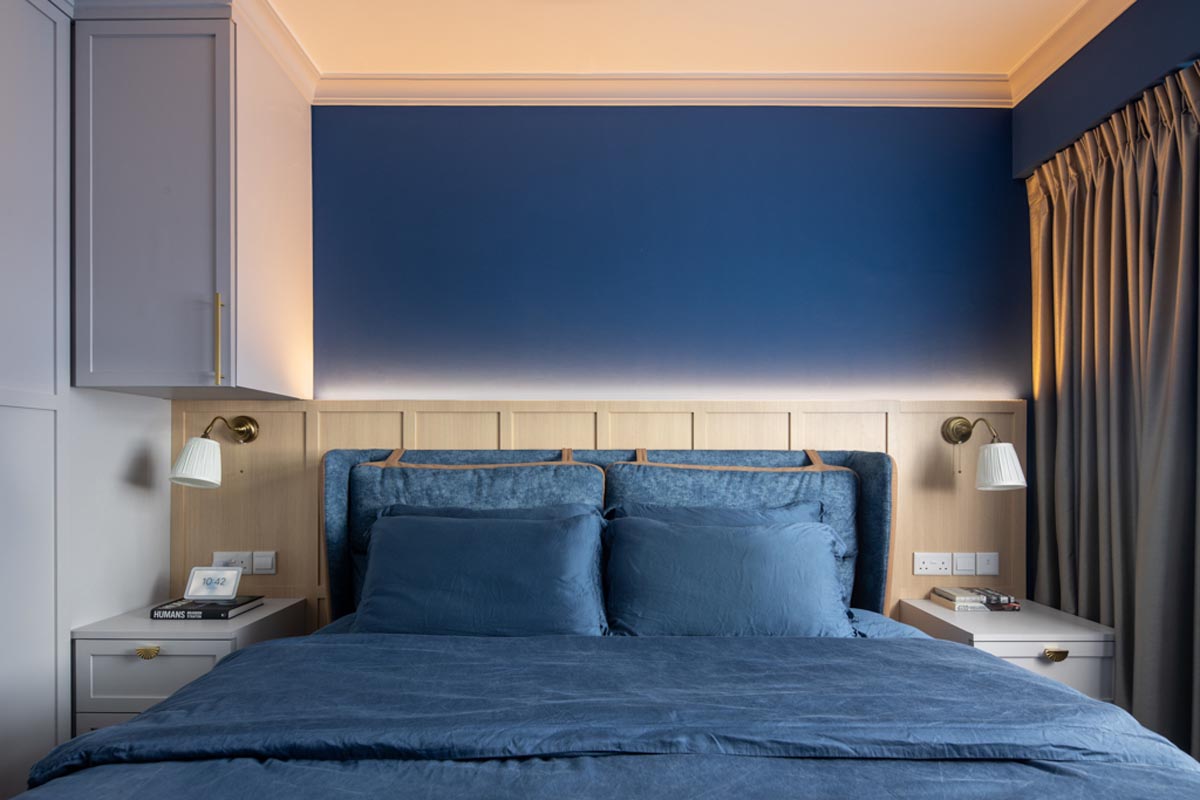 One of the spare bedrooms was turned into a den, where the couple would go to unwind and relax and to enjoy their hobbies. A continuous structure was built on the perimeters of the room, functioning as seating and storage as well as a dedicated dressing table for Desiree. 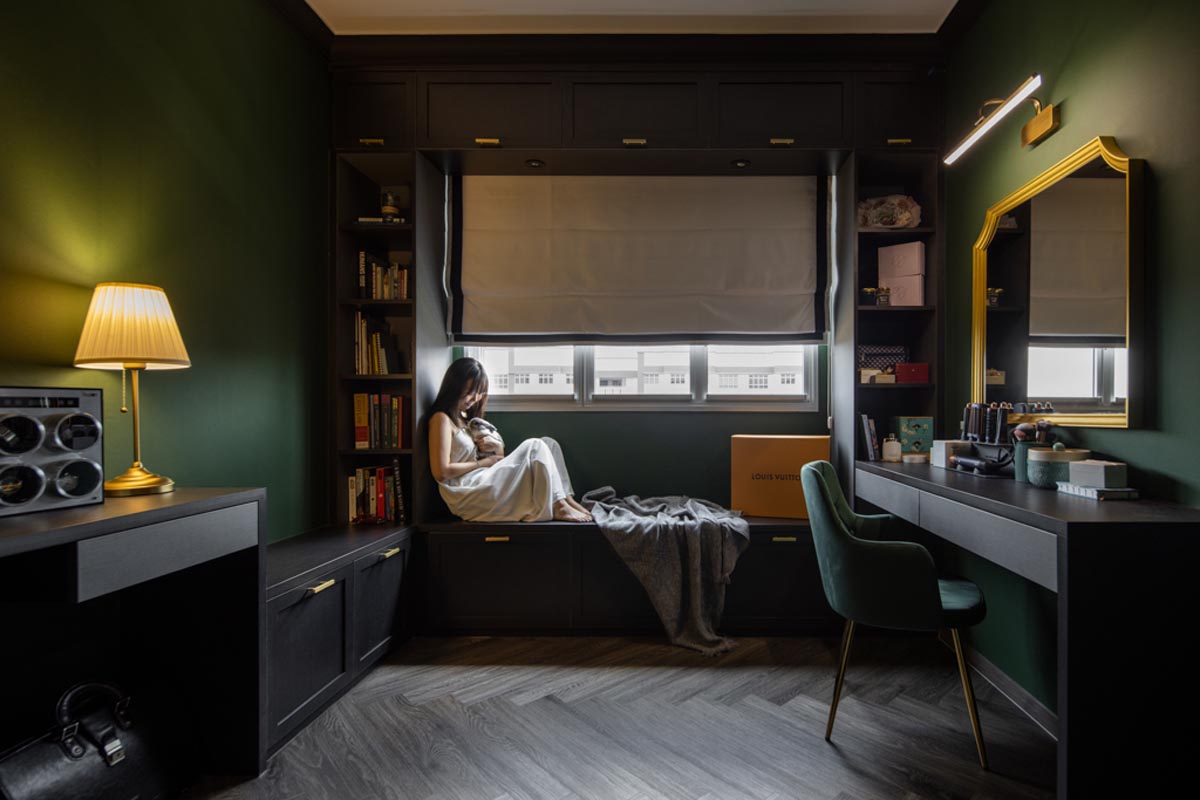 Bathrooms in this apartment are another sight to behold, with the walls clad in two different set of tiles to add complexity and depth while also mirroring the waist-height wainscoting in the rest of the home.

The same vintage floral print tiles line the bottom half of both bathrooms, but to differentiate between the master en-suite and the common toilet, the top half of the walls are covered in black marble grain tiles and white marble grain tiles respectively.

Freestanding vanities from IKEA allow the couple to keep to their renovation budget and the theme of their home at the same time. Enthusing their finds from the Swedish furniture store, Desiree tells us: “They have such a diverse range of products spanning across many design styles—one just has to expend some effort to browse their entire catalogue!” 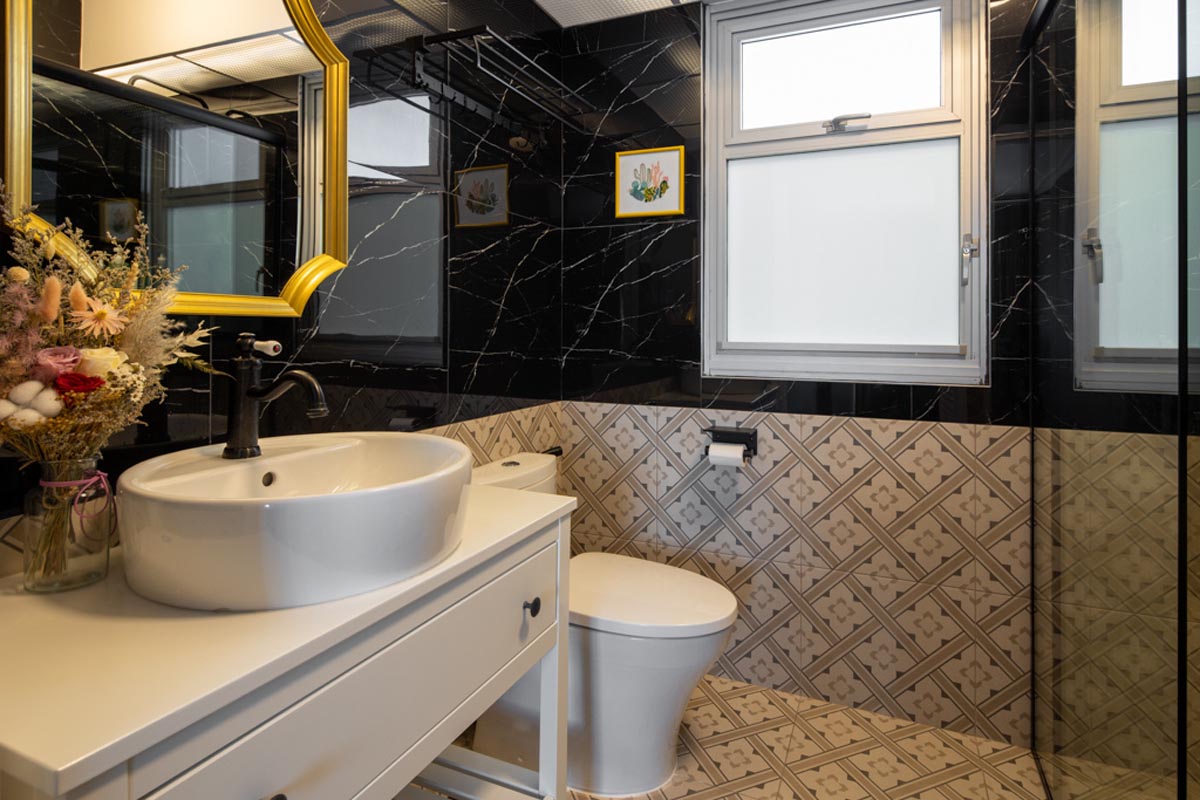 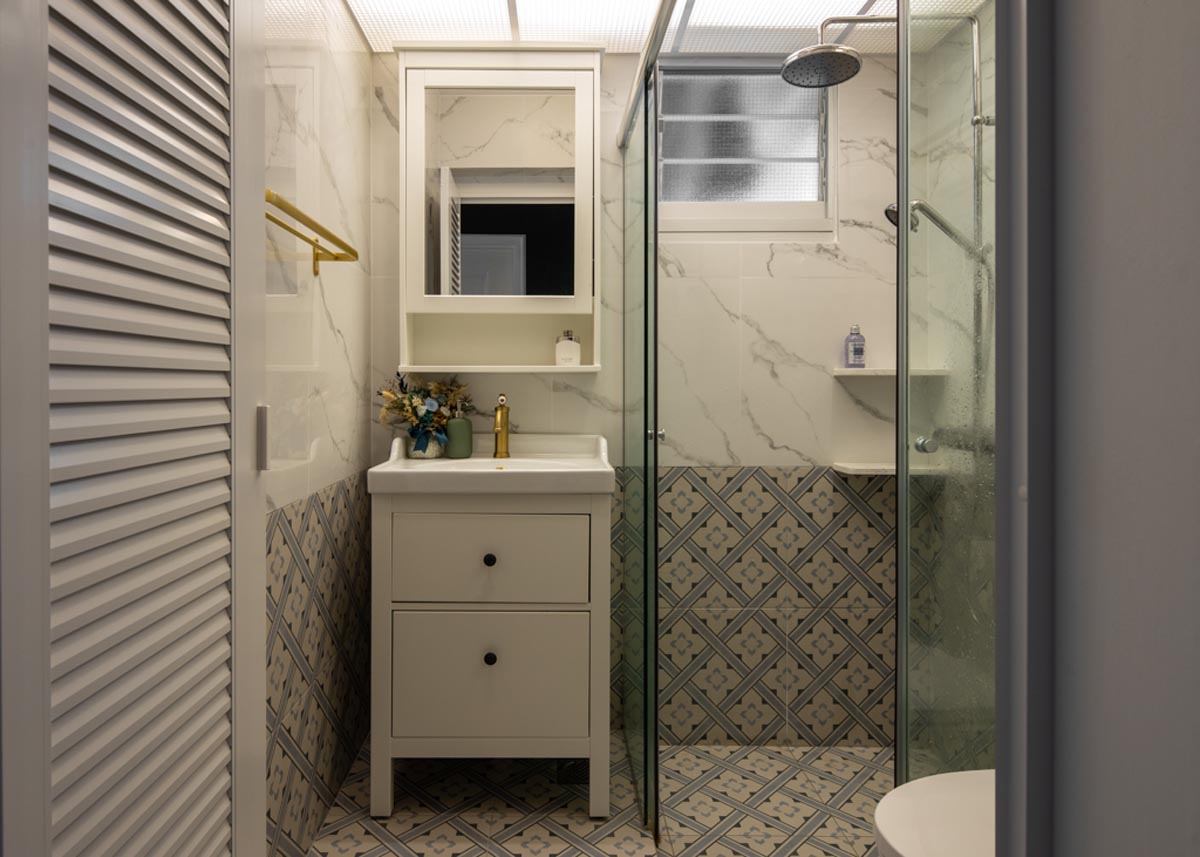 Patience was definitely necessary not only to get the best finds, but especially since the renovations happened in the midst of the pandemic, where manpower and material shortages dragged out the entire process for nearly four months. Fortunately, having an interior designer that they were able to communicate well with alleviated a lot of stress for the couple.

Having lived in their home for six months now, there isn’t a lot Desiree and her husband would change about their home. But if they could improve things even further, they would probably request to link up the storage heater to the kitchen tap so that they could get access to hot water there, and to have multiple switches for the same set of lights in order to control them from different places at home.

These small inconveniences are sometimes only discovered later, when you’ve lived in your home for some time, but it’s all part of getting your own home, where you learn things about yourself and pick new habits along the way.