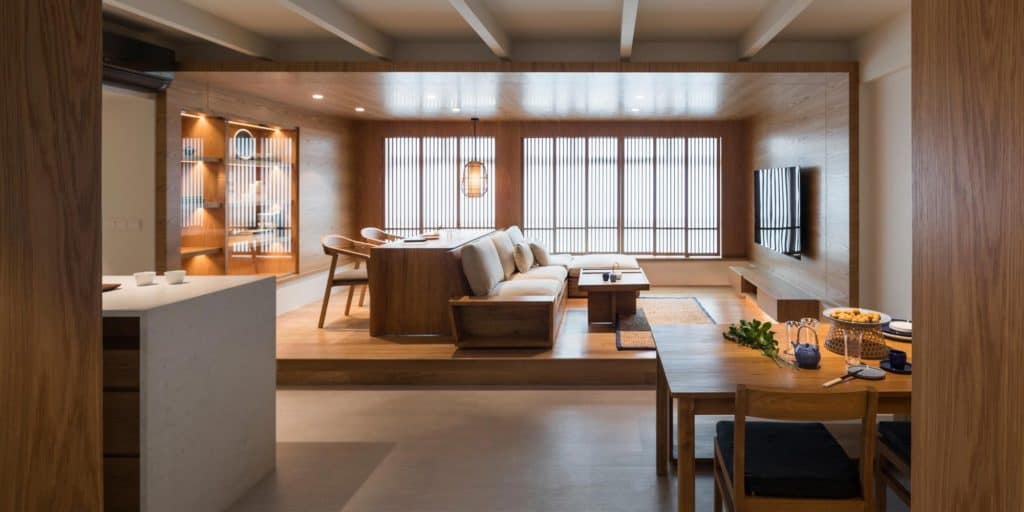 To lower costs and to allow homeowners to move in as soon as they received their keys, BTO flats are usually built very standard, with a standard layout, standard materials and standard fittings. But for design savvy folks, stock BTO isn’t going to cut it. We collated some of their best efforts to ‘zng’ their homes—all legal of course—in this article.

One of the most recognisable traits of a BTO flat? Its windows. To stand out from other BTO flats, this Clementi BTO attempted to hide the boxy and very identifiable outline of BTO windows with an additional frame that is curved at the base.

Change up the suggested layout

Going against HDB’s layout suggestions for your BTO is one way to have a more unique space. A large partition was built in the middle of this 4-room BTO flat to divide the communal spaces from the private zones. The living room now sits in the centre of it all, rather than against the window as originally suggested.

Instead of the usual BTO living room layout, the homeowners decided to position their TV in front of their window to create a larger living space. A partition, which the sofa now sits against, was erected to create a foyer and to afford them more privacy.

Most of the internal walls were knocked down in this Sengkang BTO so as to offer a more flexible use of space. This created a light and airy open plan, with a stepped-up garden corridor by the windows and the master bedroom at the end divided by a full-height wardrobe.

Internal walls were similarly hacked away in this 3-room HDB, resulting in one large open studio-like space. A single glass divider serves both the kitchen and the private quarters (bedroom + living room), closing off one side of the zone when necessary. The service yard was also relocated, so it sits next to the bathroom.

Use dividers to make a visual impact

Swivelling wood-framed glass doors segregating the cosy reading room in this flat present an eye-catching focal point in this unit.

Design: Story of Us

A divider made up of wood-framed awning windows form part of the TV feature wall in this BTO. It’s more than just a visual statement however; it also serves to let in plenty of sunshine for the indoor greens.

Panel up and hide the doors

Wall panels offer a way to mask the standard layout of a BTO flat. In this Strathmore Ave unit, a fluted wall panel conceals the entrance into one of the bedrooms.

Covered in pale woodgrain laminates that mirror the ones used in the custom-made dining table, the wall panels hide storage space and the entryway into the kitchen.

Swap out the standard doors

To offer a more continuous look, two of the bedroom doors in this Bukit Batok BTO were swapped out with a similar woodgrain laminate used in the adjacent walls, while the master bedroom’s door was changed to white to match the adjoining white walls.

The standard BTO bathroom doors were replaced with an arch and a corresponding curved hinged door.

Another recognisable trait of BTOs? The bi-fold doors at the service yard. Swap them out for a more stylish option like these French doors.