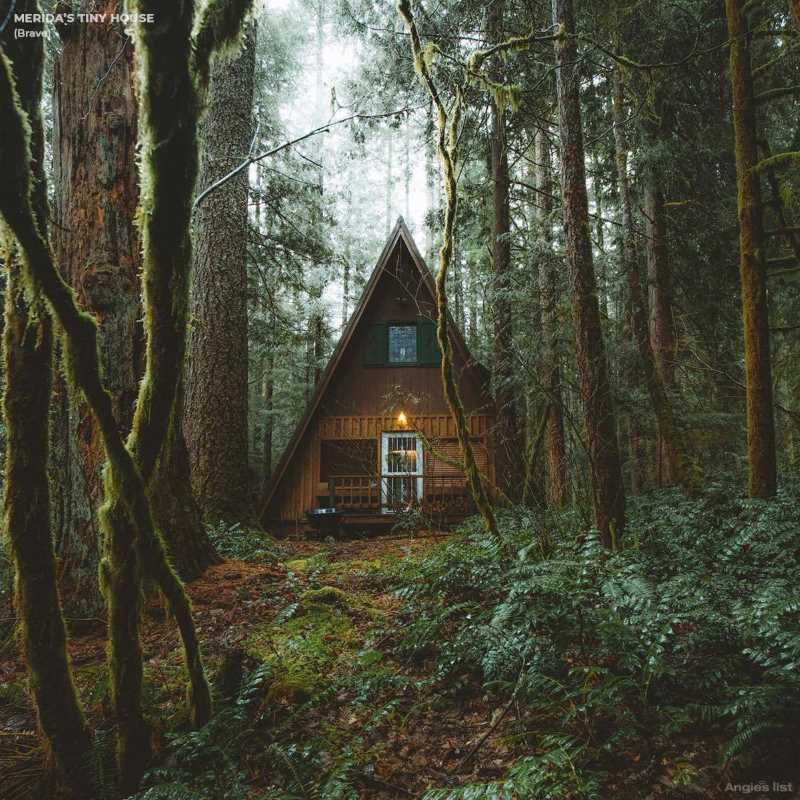 (Article Source: Angie’s List – If 6 Disney Characters Joined the Tiny-House Movement)
Adults may think they’ve outgrown their beloved Disney characters, but the truth is their childhood games of ‘make-believe’ have grown up with them.
Just check those parents who style their kitchens after Disney settings, dress up their kids after their own favorite character at Halloween, and still holiday at Disneyland whether the kids want to or not.
But adapting the wonders of the Disney universe to your 21st-century lifestyle is not always straightforward. For example, have you ever wondered what it would look like if your favorite Disney character joined the Tiny House movement? Partly inspired by Lester Walker’s 1987 book “Tiny Houses”, this blossoming culture of homes no bigger than 300 square feet is aimed at saving money and reducing waste. Not exactly priorities in the worlds our Disney heroes inhabit!
Imagine Woody, Elsa, Belle, or even Cinderella embracing the minimalist lifestyle and living in tiny homes because they’re already too #woke to retire to lavish castles. What might they look like in an understated, modern setting? What would their interior design choices be like?
These are the questions we asked ourselves before we decided to scour the Disney universe online for some answers. We re-watched our favorite Disney movies to get the most nuanced, accurate hints of what the Disney characters’ decorating choices would be.
And so here’s what we think it would look like if six Disney characters joined the tiny-house movement:

If there’s one word to describe Toy Story’s pull-string cowboy doll Woody (aka Sheriff Woody Pride), it would be “vintage”. Woody’s cowboy hat, button-down plaid shirt and cowhide vest are a sentimental nod to classic Western cowboy aesthetics. So what better way to incorporate that into a loft than good-old solid wood interiors, rustic cabinets, and a ‘bookshelf of curiosities?’

Woody’s tiny house interior. Image © Angie’s List
We thought a Woody who is inspired by the eco-conscious tiny-house lifestyle would be proud to honor the early Western hunter tradition of upcycling true-bone antlers (so long as they’re acquired cruelty-free). Likewise, we felt it was a good fit to incorporate the brown colours of Woody’s outfit into the loft’s details.

Woody’s tiny house exterior. Image © Angie’s List
The vintage western look continues out to the wraparound balcony on the exterior, just like in the old west. And every tiny house should have a rocker outside – doubly so if it’s the home of a cowboy.

Elsa may be all about being blue and cold, but her 2019 version will probably Let It All Go (see what I did there?) to embrace a chic and cozy tiny house vibe. The former queen of Arendelle Castle’s fashion style is curated from royal blue colors and lacy fabrics with icy studs or glass beads, and blue ice kitten heels.

Elsa’s tiny house interior. Image © Angie’s List
We’ve channeled these principles in the design of Elsa’s tiny house by painting the roof beams white and shaping them like snowflakes. We’ve chosen the color teal for the couch upholstery to commemorate the famous teal dress Elsa wears whenever she sings the song that’s so unstoppable, her fans can never Let It Go (we just did it again!).
Elsa’s tiny house exterior. Image © Angie’s List
Outside, the exposed wood reflects Elsa’s roots in the Enchanted Forest. And the windows echo the carved ice effect of the Frozen castle. All-in-all the cabin stays true to the Norwegian influence you can observe in the original movie’s architecture.

Princess Merida is the hero of Disney Pixar’s 2012 feature film, Brave. We envisioned her tiny house to be brimming with bold hardwood and stone – as strong and enduring as Merida herself! And we designed the loft’s chandelier as a spiral to mimic Merida’s thick curly hair.

Merida’s tiny house interior. Image © Angie’s List
Merida’s 2019 tiny house is a simple, sparse, no-nonsense affair. From the Celtic cathedral-like window, the medieval-styled fireplace, to the bold colours of the rug and chair, we’ve made sure that Merida’s personality is there.
The big windows at the back offer plenty of natural light – or the chance to glance at the glow of a will-o’-the-wisp. And, most importantly, we added a vintage painting to pay homage to Angus, Merida’s famous Scottish Clydesdale horse.

Merida’s tiny house exterior Image © Angie’s List
The exterior is rustic yet strong and dynamic, borrowing the bold geometrics of the real-life Scottish castles that inspired the filmmakers.

Disney’s Mulan doesn’t seem to fit in her own world, but her brave, strong-willed, but modest character definitely fits this chic Eastern-themed tiny house.

Mulan’s tiny house interior. Image © Angie’s List
We figured that a woman of Mulan’s independent character would have a neat, well-organized, and streamlined loft, fit for a modern-day minimalist. The overall aesthetic is toned down, with coffee and tea colours throughout the fixtures and fittings.
For added detail, we also included Chinese jars, books, figurines, canisters, and the necklaces that Mulan and her husband got before they rode off for their mission in Mulan II.

Jack Skellington is the unlikely, ghoulish hero of Disney’s stop-motion feature The Nightmare Before Christmas. He is the leader and “Pumpkin King” of Halloween Town, so his modern tiny house is nothing short of gothic – right down to the Jack-o’-lantern pumpkin head that adds a dash of orange to the bachelor-style black-and-blue colour theme.

Jack’s tiny house interior. Image © Angie’s List
The shadowy design of this tiny home is designed to remind you of Jack’s main job: to scare people. So there was no question of shopping at IKEA for Jack’s dark, brooding, faded wooden slats and beams which are accented by dead branches and lifeless trinkets inside the home.
You don’t have to go quite so ‘undead’ for your Gothic tiny home – but the Skellington look is a great way to utilize your own imagination and craft skills.

Jack’s tiny house exterior. Image © Angie’s List
Halloween is all about decay and the narrow line between dead and alive – well, let’s call it wabi sabi, shall we? The chipped paintwork inside and rickety log cabin/haunted house exterior are a darker shade of shabby chic, their tactility calling to mind the delightful hand-crafted animation of the movie.

Disney’s most popular princess is a curious but unconventional spirit who always wants to experience adventure and life beyond her bucolic town. So her tiny house needs to be just as lively and adventurous as her personality. We started by adding, first and foremost, stacks of books – because what’s Belle without books, right?

Belle’s tiny house interior. Image © Angie’s List
Belle’s most prominent colors as a character include blue and maroon, so we added blue upholstery and a reddish brown rug in the interiors. And Belle’s one splash of bling is that candelabra on the ceiling. Wonder if it’s enchanted?