What 6 Animated TV Bedrooms Would Look Like In Real life 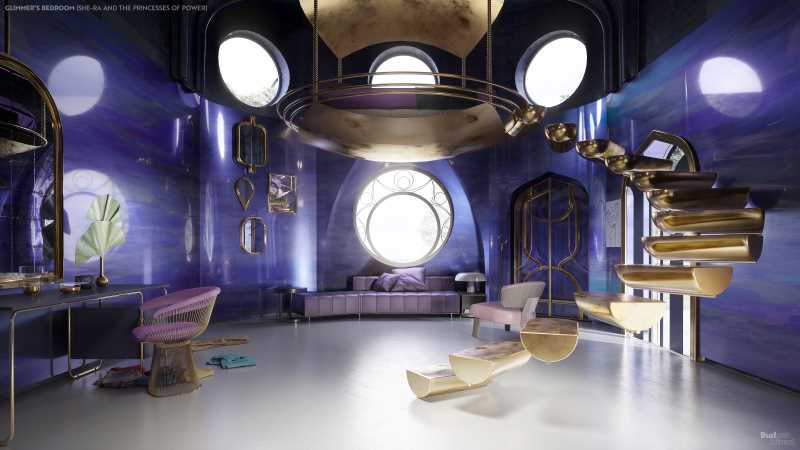 Maybe you remember some time back when we daydreamed, on this blog, about the cartoon characters’ bedrooms that we would love to have in real life. Well, it seems great minds think alike, because the people over at Budget Direct have gone one step further and recreated six completely different animated bedrooms as they would look using ‘real world’ materials. Finally, you can see what it would really be like to live in one of these imaginary boudoirs!

It makes for an interesting thought experiment, because animations have no obligation to be realistic. Hovering beds and living glow-bug light fixtures are among the myriad possibilities for bedroom design when you’re not restricted by the laws of physics.

Thankfully, today we have computer generated imagery that looks just like the real world even if it doesn’t have to obey time and gravity.

Still – check out the cartoon rooms below, and you’ll see there’s plenty of viable inspiration for your own kid’s bedroom renovation. At least in five out of six cases…

Is your child’s favourite show among those featured below?

1. Morty’s Bedroom in Rick and Morty

Rick and Morty is one of the most daring and imaginative shows on TV right now. Maybe it’s not exactly a kid’s show, but many a teenager has become obsessed with the risky Back To The Future-style antics of mad professor Rick and his long-suffering nephew, Morty.

The animation style is highly-detailed as the creators attempt to capture the mundanity of everyday life and the wildness of the science-fiction universe that lies just beyond. Morty’s room, then, is both a little drab but also kind of funny.

He has unseemly posters of semi-naked women on his wall, which the designers of the ‘real life’ version have thoughtfully replaced with a sandy beach scene. Morty also has nice posters of science concepts, and jokes about science fiction.

Helping your kid to choose well-designed posters for their room – instead of the gaudy ones that tend to catch their immediate attention – means that they will look stylish and last longer before ‘junior’ outgrows them.

You can findrugs with maps of the universe just like Morty’s, if you look online. And the concrete wall may look grim, but it is possible to apply a concrete-look finish to your room if your kid wants the industrial look. Carefully chosen linen and accessories will brighten things up, all the same.

Bob’s Burgers is a slightly more wholesome family cartoon. The daughter of the family is named Tina, and she retains a certain innocence even as she is growing into her teenage years and starting to get curious about the adult things in life.

What makes her room so appealing is the consistency of the colour scheme. The artists who recreated it ‘in real life’ have identified the colours as violet quartz and pastel lilac. Anyway, those plum-like shades are perfect for a sensitive girl or boy: pretty and floral yet bold and dynamic.

The other element that adds a touch of class to Tina Belcher’s bedroom is the stained wood. The headboard and bedside table in particular have the best of both worlds. They have the texture and pattern of wood, but the brighter, happier colours that we mentioned above. Stained wooden floorboards underpin the whole room with a sense of tradition.

Sailor Moon has been running as a manga series since 1991, and in animated form since 1992. The cartoon is about a schoolgirl called Serena Tsukino who becomes Sailor Moon as she takes on the quest to find the Legendary Silver Crystal with her cohorts, the Sailor Soldiers. Thus, Serena is very popular among little girls who think big! Don’t be surprised if your daughter asks for a Sailor Moon bedroom – even if you’ve never heard of it before.

Serena’s room is another to optimize plum-coloured tones. But it is very different to Tina Belcher’s room, due to the floor-level way of life that Japanese homes tend to engage. Serena’s traditional Japanese chabudai table is at just the right height to work while kneeling on a tatami mat – a novel idea for non-Japanese kids who might be excited to give this a try!

Did you watch Doug in the 1990s? It has made a comeback recently thanks to online availability, plus the fact that children of the 1990s now have children of their own! There is nothing flashy about Doug, but the show captures very well the feelings that many children feel dealing with school and family.

Doug’s bedroom is kind of timeless, wholesome, and universal, too. The classic pattern of the wood flooring is known as herringbone, and the Anglepoise lamp is another design classic. Like Morty’s bedroom, Doug’s has some well-designed posters that should stand the test of time.

5. Glimmer’s Bedroom (She-Ra and the Princesses of Power)

She-Ra is the show you may have most trouble recreating with your DIY skills! The rebooted He-Man spin-off is for the more adventurous among children: swords and sandals on another planet. She-Ra is the main character, and among her princesses of power you’ll find Princess Glimmer of Bright Moon. Already sounds like inspiration for interior design!

Being a princess, Glimmer has a royal purple (actually deep blue-purple sapphire) bedroom and a golden staircase. She also has a bed that hangs from the ceiling. Probably best not to let your kids hear about that idea unless you’ve worked out how to make it happen. Still, as improbable as it is, the She-Ra bedroom is definitely the most exciting among this selection. Don’t be afraid to take the features you can.

Screenshot © She-Ra and the Princesses of Power

Adventure Time is an animation for kids who aren’t quite ready for Rick and Morty. The stars are Finn and a dog named Jake who can shape-shift. In each episode they head off on adventures around the land of Ooo – a fantasy world torn apart by nuclear war, and where anything goes.

Finn’s bedroom is in a hollow weeping willow. It is a tree fort inspired by the Japanese animations of Studio Ghibli. The great thing about this design is that it is full of texture and excitement for kids, but much of it is achievable on a low budget.

Of course, you won’t be able to quite recreate the higgledy-piggledy angles, but sourcing,‘upcycling’ discarded items, and focusing on wood and natural fibres will be a good start. Yep, this is really one for somebody with carpentry skills – or a friend with carpentry skills.